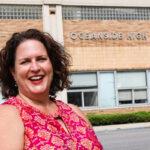 "Jennifer Wolfe, 2021 New York State Teacher of the Year, has been teaching social studies for 24 years at Oceanside High School in Oceanside, NY. Currently she teaches Pre-AP World History, AP Human Geography, and Participation in Government. She is the first teacher in the district to earn National Board Certification. Wolfe graduated with a Bachelor of Arts in International Studies from Earlham College in 1991, a Master of Arts in Teaching in 1996 and an honorary doctorate in 2000 from Clarkson University.

Wolfe was named the NYS Council for Social Studies HS Teacher of the Year in 2005, received Fulbright-Hays Scholarships in 2000 and 2004, and was selected for the Fulbright Teacher Exchange Program in 2004. Wolfe attended the 2015 US Department of Education’s Teach to Lead Boston Summit and later hosted her own USDOE Leadership Lab at Adelphi University. She co-created the Long Island Teacher Leadership Powered by Teach to Lead Conference in 2017 bringing together educators to work with national, state, and local leaders.

From 2015-2018, Wolfe was the Improvement Lead on the Network to Transform Teaching Grant awarded to Oceanside from the National Board for Professional Teaching Standards. One of the grant projects was the subject of an article published in the August 2016 edition of Learning Forward’s JSD: Bridging Silos: Novices Partner with Veteran Teachers on the Path to Board Certification.

Wolfe presents at state and national conferences and is featured on TeachingChannel.org. Director of the LI National Board Network, Wolfe helps teachers achieve the profession’s highest certification. An unapologetic proponent of teacher leadership, Jen wholeheartedly believes that the challenges we face today in education can best be solved with a table full of teachers leading the way. Jen spends much of her free time making sure every elected official has, and uses, the number of an accomplished in their cell phone."